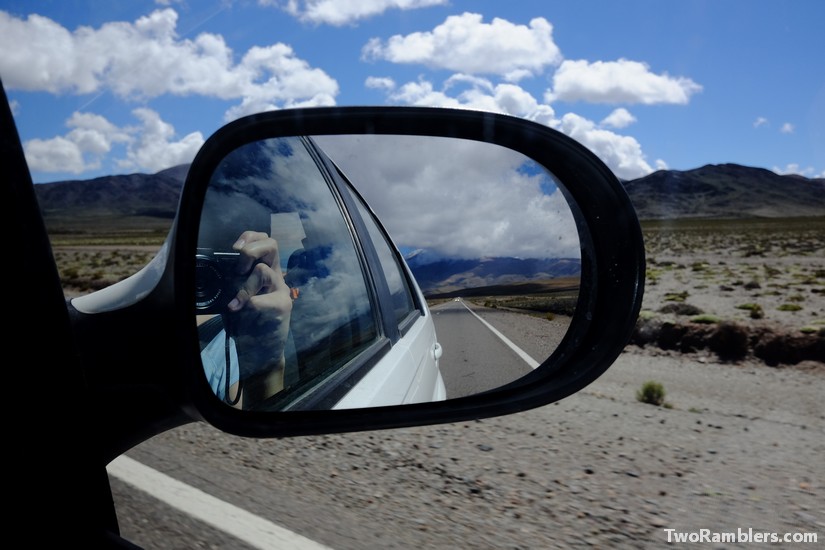 With a week to spend before our flight from Salta to Punta Arenas, down in the South of Chile, we decided to go on a road trip. In Salta we rented a car and off we went on the discovery of the Argentinian north.

We spent two days in the rocky, dry mountain landscape to the west and south of Salta. On the third day we followed the route of the “the train into the clouds” and ended our trip in the jungle. With our car breaking down at the worst moment possible and probably the heaviest storm we have ever experienced this trip ended up being more adventurous than we had planned for.

Until just a few years ago there used to be a train going out of Salta up into the mountains to over 4200 meters: El tren a las nubes (the train into the clouds). The train went to the city of San Antonio de los Corbes and beyond to the border with Chile. For the past 30 years this train was primarily a tourist attraction. It drove over some impressive bridges crossing the valleys and went high into the mountains, into the clouds – as the name suggests.

The majority of the train line has recently been shut down, only a short but very expensive ride from San Antonio remains. There is however a road following the train tracks all the way to San Antonio, offering similar impressive views over the valleys and mountains.

From our campsite in Campo Quijano it was easy to find the road. To our left lay a big river, to the right thick green forests. On the other side of the river we saw the train tracks. Quickly we reached a first bridge where the train used to cross the river. For the rest of the day we saw many of these bridges. The train used to zigzag over the river while the road kept to the right bank.

As we drove into the mountains the landscape slowly changed from the forests to mountain tops covered by cacti. The rocks were of different colors, some mountains seemed to be more red, others shone in a strong blue under the sun. We were impressed by the bridges constructed in this barren landscape. Sometimes we completely lost the train tracks out of sight but then the road suddenly crossed them again. We passed some abandoned train stations.

There were only a few houses along the road. We took a few local hitch hikers with us, on their way to a school further up on the route.

By lunchtime we reached San Antonio. It was a very hot and sunny day, so we had not driven through any clouds. The road had been spectacular nevertheless. We strolled around the town, noted a number of big tourist buses that had just arrived to take the last few meters by train. For lunch we had delicious humitas and empanadas and then attempted to continue our ride. We had hoped to drive though the mountains, towards a salt desert and then to Purmamarca, a city famous for its colourful mountains. Driving in that direction we quickly met a bumpy dirt road.

We talked to some people coming in our direction and they told us that even with their 4×4 they had not attempted to cross the salt flats.We decided not to take any risk, also knowing that we had already seen salt flats in Uyuni. Instead we took the road back to Salta.

It ended up being a very long drive but we reached a cosy camp site half an hour north of Salta, camping Quitilipi in La Caldera, full of trees and a little stream running through it.

When Kevin opened the door to the showers something flew right at him: a bat. It kept circling excitedly around in front of him. While Kevin was taking his shower it continued doing its rounds, never getting too close but also not willing to leave the twilight of the showers.

Over dinner, we watched a spectacle of lightning from a thunderstorm in the distance. Suddenly, all lights on the campsite went off. We sat in the dark, watching some flashlights going on around us. In the distance we could see that also in the village close by the electricity had gone off. In the complete darkness glow worms were flying around us. It was a magical moment.

We decided to head to bed but just as we were brushing our teeth the wind took up, out of nowhere blowing at us with an incredible strength. The trees around us were shaking, their leaves flew at us. We grabbed our stuff and got into our car just on time. The sky broke open, huge rain drops were coming down, thunder and lightning striking at the same time. We were in the middle of the storm. From the car we could the chaos around us. People running towards the bathrooms for cover, some with their entire tents. The rain got very heavy, making an incredible noise as it hit the car. Still, it was completely dark outside, only the lightning lit up the night around us showing us how the trees bent under the storm.

We got worried about our tent, even though the storm cords were well fixed. On our bare feet and with as little clothes as possible we got out of the car at a moment when the wind had cooled down just a little and took a look. Our tent stood in a river of more than 10 cm of water. The ground sheet was just about to drift away. Luckily, inside everything was still dry. We love our tent!

As the storm slowly cooled down and the raindrops got back to normal size, Kevin went to look if there were any other campers who needed help. He found a tent of two Argentinian girls, standing in a river similar to our tent. To their left and right big branches had fallen from the trees just missing the tent. The girls were chatting and singing in their tent, not fully aware of the chaos around them.

Then, as heavily as it had started, the storm was gone. The rain stopped, there was no more wind and only in the distance the lightning continued. We moved our tent out of the newly formed river to a better spot and went to sleep.

The next morning, the campsite was dry again. Only the branches, leaves and bark lying all over the place showed the destruction of the night before. The campsite staff was already busy collecting the wood. We dried our tent in the morning sun and drove off into a very hot day.

Accommodation: The camping Quitilipi in La Caldera was a little rundown, but a very beautiful spot.  A place to stay for a few days. and explore the seroundings

Good to know: The cost of doing the route from el Tren de las nubes was the same by tour as by renting a car. The advantage and disadvantage is that you drive yourself. You can stop where and when you want, but the altitude makes you tired fast.