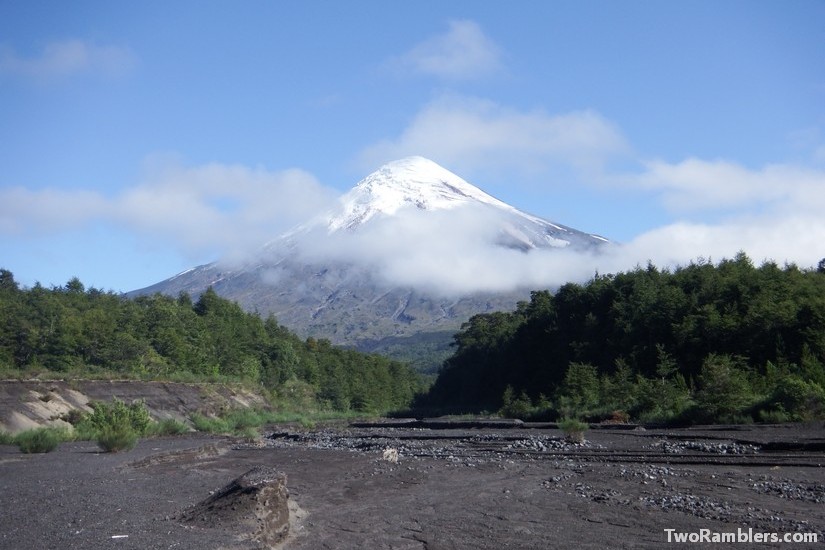 With April coming to an end, warm, sunny days became scarce as we travelled through Patagonia. After some rainy and snowy experiences we had given up on trekking and sleeping in our tent. However, a sunny day as we were in Puerto Varas still invited us to go on a hike and discover the nature around the city.

Puerto Varas lies at Lago Llanquihue in the southern part of Chile’s Lake District. The lakeside offers great views on the volcanoes Calbuco and Osorno. We headed out to discover the area around the latter one.

We got an early start for the day, leaving Puerto Varas by bus to Petrohue. The small settlement and port lies at Lago Todo Los Santos and is a well visited attraction because of its waterfalls. We had read mixed reviews about the waterfalls and our conclusion was that it would not be worth visiting them. Apparently, there is comparably little water in Rio Petrohue in autumn, making the waterfalls rather small.

So we avoided paying the expensive entrance to the waterfalls and instead went on a 10 km round walk to the north of Petrohue. The path led us first through a forest of low trees and thick bushes. As we were at the feet of Volcano Osorno the ground was composed of black sand and rocks. In the beginning of our walk there was only a wall of clouds in the sky. But as time passed the clouds lifted and we could see the snow topped giant.

The forest was full of murtillas, those delicious red berries that we had discovered on our hike over the border from Argentina. We ate a lot of them as we slowly walked on. We crossed a few dried out river beds. They looked like they had been formed by the lava coming down from the volcano.

We took a turn and walked back in the direction of Petrohue along Lago Todos Los Santos. The view over the lake was beautiful, as we walked over the sandy beach. Surrounded by green mountains the place was very calm.

From Petrohue we walked on a dirt road towards the waterfalls. The road let through a forest. The trees were very green, not only from their leaves but also from the moss and climbing plants covering trunks and branches. We had our lunch break with a view over the wild river that turned into the waterfall a couple km further downstream. It had gotten very warm and we soaked in the autumn sun.

After walking past the entrance to the waterfalls we continued our hike towards Volcano Osorno. We walked uphill, still the black sand under our feet and slowly getting into our shoes. Further down the route we left the trees and murtilla bushes behind us. We reached an open area, similar to a wide river bed. Black pieces of volcanic rock covered the ground. Although the last eruption of the volcano happened almost 150 years ago, we could still clearly see where the lava must have passed. No plants grew on this volcanic ground, running in a long line from the volcano downhill.

Our walk led us back into the bushes and then to a view point over the green valley and another volcano. A sign informed us that volcano Calbuco had last erupted in 2015. We had seen the traces of the lava reaching the houses in Ensenada, another village at Lago Llanquihue.

From the view point we wanted to reach the road leading to Ensenada and from there take the bus back to Puerto Varas. On the last 300 m of the walking route, the nature around us changed completely. We were no longer surrounded by bushes but by huge, old trees. It felt like being in a jungle. Plants were growing over one another and we were walking through a tunnel of green all around us. It was such a sudden change from the rocky lava landscape just a few km before into this fantastic jungle.

When we reached the road, a Chilean couple gave us a lift in their car to Ensenada. They had spent the day visiting higher parts of the volcano. All along the road cars were parked and we saw many people walking through the bushes picking the delicious murtillas. Back in Puerto Varas people were selling the berries on the street from big buckets. But we had eaten so many of them during our hike that we didn’t need to buy them any more.

We didn’t regret our decision to spend an extra day in Puerto Varas to go on the hike at the foot of Volcano Osorno. The volcanic landscape with its peculiar black earth and the lines of lava flow was something we hadn’t seen before and the murtillas made the walk extra sweet.