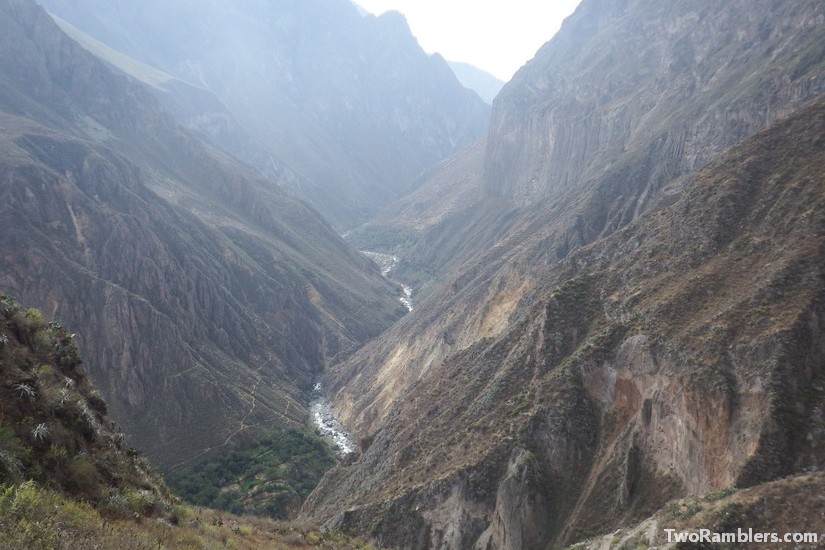 As winter was coming to Patagonia we made a big jump. A 48 hour bus trip brought us all the way through Chile and over the border to Peru. We spent a few days in Arequipa, a cozy, sunny colonial town before heading off on our first hike in these new surroundings. We wanted to discover the Colca Canyon, one of the deepest canyons in the world, famous for the condors flying over it and the oasis like landscape at the bottom of the canyon.

Early in the day we got on a bus that would bring us to Cabanaconde, from where we wanted to start our hike. The bus was filled with other tourists, all going to the same destination. We all were given seats on the right side of the bus. From there we were going to be able to get a good view on the canyon once we got there. But first a long, exhausting ride was waiting for us. The bus drove from about 2000 m up to 4000 m through a hot, dry and rather dull landscape. Only once we got higher into the mountains a fresh breeze brought some relief. But we both started to feel the impact of the altitude. We were tired, had a headache and a general feeling of discomfort.

After about five hours we reached Chivay. The town lies close to the Colca Canyon. Many Peruvians got on the bus here. The atmosphere changed: there was a smell of freshly cooked food, mostly garlic on the bus and we got to listen to the music from someone’s phone.

Out of Chivay the landscape got greener. In the canyon to our right were fields constructed in terraces, each no bigger than 10 or 15 m² surrounded by a wall of stones. Water sprung through the dry, rocky ground allowing for some plants to grow.

In the afternoon we reached Cabanaconde. Kevin was exhausted from altitude sickness, so we checked into the first hostel we found on the main square. In the evening we both felt worse. We skipped dinner and just stayed in bed. The next morning we decided to give ourselves another day of rest before starting our hike.

Day 1 – Down into the canyon

After a day in our hostel bed we felt better and set off on our trek. The sun was already high and quite warm. We bought our ticket into the canyon and left Cabanaconde. First, we passed a bull fighting pit where a horse market was going on, then we walked along some fields. Most of them were already harvested but we still got to see some cereal.

Quickly we reached the way that would lead us into the canyon. We stood on a cliff, seeing the valley of the canyon far down below us. From there our walk was going downhill for the rest of the day. We could see the entire path ahead of us, going downwards in slopes. There were just a few people ahead of us.

After about an hour’s walk in the full sun we came along a dried out river bed that offered some shade. We stopped to get some rest, still feeling the exhaustion from the previous days. We met a dog also hiding away from the burning sun. He looked like he was in need of some friends but as we left he did not follow us. He might have been waiting for someone going the other way. As we continued the path got steeper and steeper. The landscape was dry and sandy again, the sun almost unbearably hot and no shade in sight. Only now and then we saw a cactus on the side of the path. Some condors were flying above us.

Finally, we reached the bottom of the canyon. We crossed the river Rio Colca. It looked tiny considering that it were the waters of this river that must have formed the deep canyon we were stood in. From there we had to walk for another hour, mainly downhill to reach Llahuar. First, the construction site of a big building in concrete came into our view. The owners of the hostel where we slept told us that they were building a new restaurant. It was hard to believe that such a big building was being constructed in the middle of the canyon that cannot be reached by car.

We chose a cozy cabin to stay for the night. It stood on a beautiful spot beside the river. From our terrace we had a view into the canyon and on a grass field where some other hikers were resting. Kevin tested out the hot springs right beside the river while Franziska took some rest from her still upset stomach.

In order to avoid walking under the burning sun as we did the first day we got up very early. At 7:30 when we were ready to leave the sun hadn’t reached the bottom of the canyon yet. We walked back to the bridge where we had crossed the Rio Huaruro the day before and then continued uphill. Most of the other tourists we had met wanted to walk along this river towards its source up in the mountains. Instead, we decided to stick to a shorter route parallel to the Rio Colca, following the Colca Canyon to the east.

For most of the day we were supposed to follow a dirt road, connecting some of the small villages with each other. But Kevin discovered a smaller path on his map that looked a lot greener. And indeed, first we walked between cacti of all sizes and aloe vera plants. They were all planted nicely in rows, some of the cacti still had some fruit on them. The closer we got to one of the springs coming out of the rocky, sandy ground, the greener it got around us. There were big avocado and fig trees, offering shade and a lot of beautiful flowers. At some places the air felt almost tropical.We came closer to a few houses. There were stone walls surrounding small fields of corn, cereal and small peppers.

Then we got back on a sandy, sunny path and onto the dirt road which led us into a village. We stopped for a short rest and then continued along the road. A dog started following us. A small one, blond like the sandy colour of the hills around us. He was unimpressed by our attempts to scare him away and thus we accepted his company and shared our water and some bread with him.

The dog stayed with us as we walked up a viewpoint and got our first look at a place called Sangalle, referred to as the oasis. It lies at the bottom of the canyon and against the sandy, rocky walls of the canyon looks like a little paradise. After another hour on the road we reached the first of several villages in a row. Here, we lost our new friend to some other hikers who seemed more enthusiastic about meeting him than we were. When they started caressing him it was clear that he would not follow us anymore.

We walked through the villages, met a few groups of hikers, saw several hostels and shops and even passed a guinea pig farm emitting an incredibly squeaky noise. From there we walked downhill to San Juan de Chuccho. The path was very steep, leading back to the bottom of the canyon. We followed a small canal, transporting the water to all the green fields around us. Finally, we walked among trees again. There were huge fig trees, others were full of avocados and also some eucalyptus trees. By then it was noon. With a few clouds it wasn’t as hot as the day before but still we were happy to find some shade among the trees.

In San Juan we found a quiet place to stay. It was a hostel, run by a family with chicken running around on the grass. The place had no electricity and so we ate the delicious dinner served to us in candle light. Our room had a view over the route for the next day back to Cabanaconde. We could see the path going up the steep wall in serpentines for a bit. But about half way up the slope it was impossible to figure out where the path continued. We kept watching the other side of the canyon but were unable to see how we were going to get out of the canyon.

Day 3 – Back to Cabanaconde

We left our hostel at 7 am and walked to the bottom of the canyon. There we crossed a bridge over the Rio Colca and then the climb started. The sun was still behind the mountains so it was not too warm but we still walked very slowly, taking many breaks. In zig-zags we walked upwards, stopping for the stunning views over the canyon and the flowers and cacti growing in the dry stone ground.

As we were close to the Cruz del Condor, the famous spot for watching condors we had hoped to see some of the big birds circle above us. But we only spotted some smaller hunting birds and watched singing birds sail on the winds of the canyon.

Half way up we met the first hikers coming down. Many were walking with a guide in groups of ten. Having just started their hike, they clearly pitied us, having to walk uphill under the increasingly hot sun. But we knew that they would look the same in two or three days when they had to get out of the canyon.

After four hours we were back in Cabanaconde and were able to catch a bus back to Arequipa in the afternoon.

Our hike into the canyon was an exhausting but fantastic experience. When we searched for information about the hike we found recommendations to walk in a group with a guide but our experience showed us that it is possible to do this hike independently. This allowed us enough time to get used to the altitude and we were able to freely choose our route and accommodation. Seeing how people live in such remote areas and make use of the little water there is to create these lush, green gardens was very inspiring.

Transport: The entry point to the Colca Canyon is Cabanaconde and there are a lot of buses daily between Arequipa Bus terminal and Cabanaconde.

Accommodation: It was low season when we were there (May) and there was a lot of free space everywhere, even in the small towns in the Colca Canyon. We didn’t book anything in advance and had a lot of choice.

Health: Altitude sickness hit us really badly, although we acclimatized a few days in Arequipa and followed all the tips to soften the symptoms. We were very sick once we arrived in Cabanaconde, and lost a day recuperating from it. Take that into account when planning!

Our itinerary: Day 1: Cabanaconde – Llahuar, Day 2: Llahuar – San Juan, Day 3: San Juan – Cabanaconde. Most of the people we met on the route were going to Waruro’s waterfall on their second day and then to the Oasis Sangalle on day 3. Because of our altitude sickness and because we had seen so many beautiful waterfalls in Patagonia, we decided to skip Waruro. But this can be a beautiful extra day if you are up for it. We did not go to the Oasis Sangalle as we expected it to be crowded with tour groups and instead left the canyon via the eastern route. According to most locals we talked to, this is also the easier route to walk out of the canyon. Apparently it is less steep than the way between Sangalle and Cabanaconde.