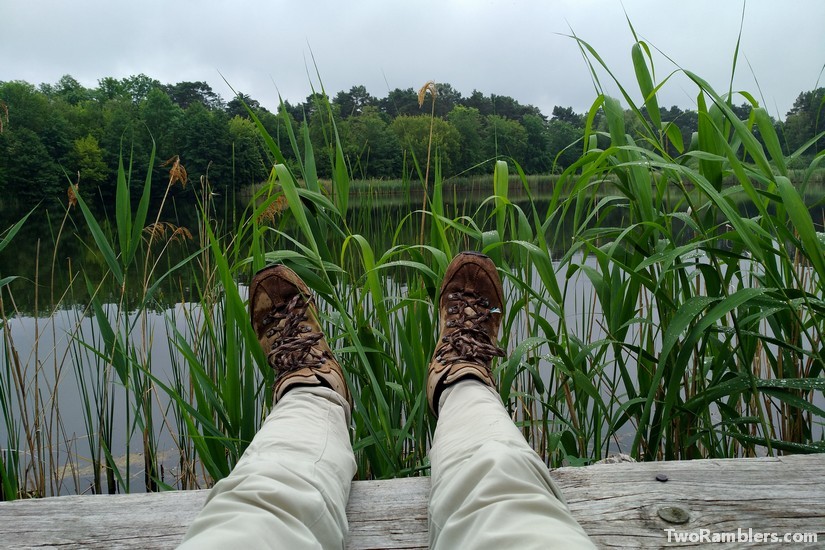 In June 2020, as summer came rolling in with hot and sunny days, the restrictions following the Covid-19 pandemic were slowly loosened and Kevin was back in Belgium helping out his family, I felt a strong urge to get out of the apartment and into the woods. It was the first time for me to hike on my own and there were still some doubts if the newly gained liberties would last or a second wave of infections would get us quickly back home. Therefore, I chose a route close to home: the 66-Seen-Wanderweg.

The 66-Seen-Wanderweg (66-lake-route) is a circular trail around Berlin of 416 km in 17 stages. With a maximum distance of 25 km away from the city, the route’s stages have starting and end points that can be reached by public transport. Although at some points the route just about reaches the borders of Berlin it felt like I was in a different country: empty forest paths, the air full of humming and singing and of course those idyllic lakes.

Over the month of June I hiked 290 km in 14 days, completed 12 of the 17 stages and passed about 50 of the lakes. Kevin joined me for the last five days of the hike. I started in the north east of Berlin in Melchow and followed the route along the east and south of Berlin to Potsdam. There I ended my hike. After Potsdam there are no more lakes in the west of Berlin and I had seen the stages in the north of Berlin on previous trips. I mostly did day hikes but spent four nights on camp sites.

It was a very warm June, sometimes even too warm to hike but passing through forests and along lakes made the heat more bearable. On a couple of days there was a slight rain which was refreshing and gave a different look to nature. Over the course of the month I could watch nature change with the warm days. The flowers of the elderberries turned into small, green fruits. First the blueberries, then also raspberries, wild strawberries and cherries became ripe and sweetened the hike.

In this post, we share a few impressions from this beautiful route. It is a little reminder that sometimes you do not have to travel far to escape your routines and experience nature.

The 66-lake-route is indicated by a blue circle on a white square. It was mostly easy to follow so that I could watch my surroundings instead of my map. Sometimes my phone did help though, as there were junctions without an indication or signs that must have been overgrown.

I walked mostly in nature: on forest paths, sometimes sandy, sometimes grassy green, at times wide enough for cars to pass, at others so narrow that I had to watch out for thorns and nettles. I followed winding tracks along lakes and rivers with lush and wild mixed forests. But I also followed routes that led for kilometres on a straight line through pine forests, planted in organised rows with almost no other vegetation to be found.

Similar to the nature, the villages I passed through varied a lot. Some were pretty ones with many tourists who came for a castle or a bigger lake. Others were quiet ones with only a few family homes and gardens used by Berliners in the weekend. Still others looked almost deserted. I passed through camp sites full of vans and huts, saw fancy hotels, yacht ports but also old rowing and fishing boats. Now and then I stumbled on a relic of Soviet time military facilities in the woods.

Brandenburg is very flat which makes walking easy. The highest point I reached was at 150 m where I still decided to climb on an artificial view point. From there I could see very far, no mountains or hills in sight but a view on Berlin’s Fernsehturm at the horizon. In the other directions there was even less to be seen.

On most days no more than 15 minutes after I had left the train station I was in the forest. And for the rest of the day I would not meet anybody. At few occasions I saw someone in a kayak on a lake or a few cyclists but there were no other hikers around. It was so quiet in the forest it felt like having my head under water with all usual noise of the city gone. Only birds, insects and a little wind in the trees.

In the south of Berlin the route was a little less idyllic. Twice, I had to walk on a main road with no pavement. Against the silence of the forest the motorways could be heard quite far. One day, together with Kevin we passed through a wind park. From far away we had heard a noise which sounded like a busy factory. It were the rotors of the wind turbines. The route passed directly under them and we watched these huge towers in awe.

Almost all start and end points of the hikes’ stages could be reached by a regional train or even with the S-Bahn. However, these trains do not come very often. A couple of times I ended up sprinting the last couple of kilometres to the next station to avoid having to wait an hour or even more. At other times I decided to slow down and take the time to read a bit. On my first day, I had just missed a bus (there were constructions on the train tracks) and sat down in the centre of a small village. It was a hot day and I tried to find an open shop to get some cold water but everything was closed. Then three girls who had been playing in the streets approached me and offered one of their ice creams. They must have noticed my yearning 🙂

Apart from weekends, the trains were not too full. I spent up to three hours on trains every day and was always happy to find a seat. I got a lot of reading done and listened to podcasts but sometimes just fell asleep.

This travelling back and forth made me appreciate the four nights I slept in a tent even more. I felt further away from home and closer to nature. However, it also meant carrying a heavier backpack and thus made the walking itself more difficult.

Along the route I saw all kinds of lakes: different sizes, depths, some overgrown with water lilies and surrounded by thick reeds, others more open. Of the 66 lakes I passed about 50 and swam in six of them. I discovered many new favourite spots. The ones that were further from a train station were so quiet. Even on sunny afternoons there was nobody around. I often took a break at the lakes to watch birds, insects and fish in these little paradises.

At the Große Seddiner See I felt like being at the sea side because of the sandy beaches and the flat lake. Others were deeper, much cooler and in the middle of the forest.

I also enjoyed walking along different parts of the Spree, watching kayaks and house boats pass. The river looks so small and clean before it gets into the Berlin.

My favourite part of the hike were all the animals I got to see. Every day I came across a different species. My guide book for the hike had promised me loads of different singing birds, insects, snakes, birds of prey, foxes and deer – and in the end I saw them all.

During the first days I noticed the most common ones: I watched blackbirds collecting twigs beside my tent, ants in different sizes, squirrels running up trees as I approached and woodpeckers flying from one tree to the next. Less exciting were the horseflies and mosquitoes hunting me, sometimes for several kilometres.

At the lakes I heard the funny sounds of the reed warbler but never got a closer look at one. I watched the fish jump. Twice I met a fox sitting in the middle of the path. I saw lizards, slow worms and grass snakes. There were storks with chicks in their nests, swans and ducks with little ones. During a lunch break at a village pond full of frogs I watched their jumps and listened to their constant ribbits.

Overall, the variety of birds impressed me. For several days I heard cranes shouting through the forest and was so happy when I finally saw a couple circling over a lake. I watched cormorants and herons. I saw a common kingfisher in a sprint flight. The highlight was a white tailed eagle at the edge of a forest which I watched circling upwards with the thermal lift.

When on the second last day of hiking I caught a tic crawling over my leg I found it to be a disappointing last animal to see and I definitely could have done without. However, the next day, walking through a forest Kevin and I stumbled upon a group of five fallow deer that probably had not heard us coming.

Travelling in times of Corona

The first day on a train after many weeks at home felt very strange, even wrong. But I quickly got used to having people around me again and as everybody kept their distance and wore a mask, I became more relaxed about these trips.

The first night at a camp site I was told to wear my mask in all shared facilities – which got me wondering how I was supposed to brush my teeth. All the camp sites did their best to implement the new rules. It was obvious that they were not working at full capacity but there were other guests around enjoying their time outside.

Apart from a few unavoidable encounters on crowded trains during the weekend, I spent my days alone in fresh air. I would recommend this hike as the ideal activity during a pandemic.

The 66-Seen-Wanderweg was a great start into the summer. It made me aware again of the beauty of the nature (almost) at my door step and made me long for more.

For more information on the 66-Seen-Wanderweg, you can check the official website. The guidebook by Manfred Reschke (also linked on that site) helped me find my way. It was full of background information about the region’s history, nature and geology.

2 thoughts on “The 66-Seen-Wanderweg – hiking close to home”