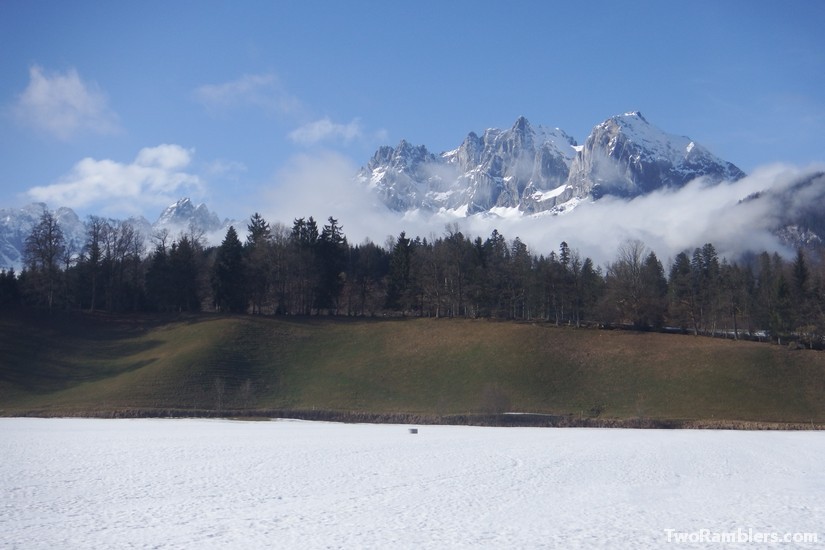 New year – new adventures! After a year in Berlin, we decided to pack our bags again and do some rambling. We are both enthusiastic skiers and thus hoped to find a way to stay in a ski region for longer than the usual, intense six days of winter vacation. And we got lucky. Through Workaway we found a place where we could work in exchange for food and accommodation in Sankt Johann in Tirol, a small skiing resort. We spent a month there. As it would be too long for one article to tell about all our adventures, here the summary of one (maybe not completely typical) day.

Like most of the days, we got up early. We wanted to go skiing and as we really lived just right on the slope, getting up early meant we could be among the first ones to draw our lines through the snow, freshly prepared by the snowcats.

It had been a warm week, the village and the lower slopes were starting to show some green. But the previous night it had finally snowed again. Probably 15cm had come down. That was great for our skiing plans but at the same time meant that there was some work waiting for us: clearing the snow.

The first task of every day was to let the six ducks out of their cage. That morning they were sinking deep into the snow with every step they took towards their frozen pond. Next were the quails. They always stayed in their cages but needed some fresh water every morning. Clearing the snow around the house took us almost an hour – we were nowhere near to be the first ones on the slope as we had planned. But there was enough fresh snow left for us.

From our house we skied the 200 m down to the valley station of the ski lift. With the big gondola we got to the top of the Harschbichel and tested our abilities in the deep snow on a few red slopes. Immediately we noticed the difference, deeper snow means a lot more work for the knees. It was still rather quiet on the slopes as the ski schools only started at 10 am. There was some cold winds and it continued snowing but slowly, the sun was coming through.

After a few runs on the red slopes, we went on to the only black slope of the ski area. Here we felt the work for our knees even harder. With quite a few kilometres in our legs from the previous days – on sunny days with melting snow we went on long walks in the area – we decided to head back home for lunch. It was a real luxury to just end a skiing day whenever we felt like it. Usually, when our skiing time is limited to one week a year we feel like we have to get out as much as possible of our ski pass. In Sankt Johann it was easy to decide not to ski when the snow wasn’t good, we knew better days would come.

During lunch we sat in the kitchen, watching the other skiers. Then followed another short round of work. We brought in some fire wood and cleared the paths through the snow we had made in the morning. With some energy left, we decided to build a snowman and then sat in the sun on the terrace with a great view on the slope. We watched the professionals coming down in beautiful, short curves, despite the deep snow. We felt with the beginners in the ski schools who struggled even more than usually to follow their instructors.

In all the activity we saw a woman fall as she took a turn. She fell hard and didn’t look like she was able to get up again. Something was wrong with her leg. Quickly her friends and other people stopped to help her. After some discussion it looked like they called an ambulance and we continued watching the other skiers. It took a while till two guys with a rescue sled arrived. The first thing they did was to stick several pairs of skis into the snow in form of crosses to make people go around the accident. The accident happened a little uphill from our house. We were not able to understand everything that was being said but at some point we heard the word ‘helicopter’.

The mountain rescuers shut down the slope for all skiers. Everybody had to stop and wait. After a couple of minutes we heard the first noise of the helicopter approaching. As it came closer it got louder and made a lot of wind. There was snow and dirt blown up into the air, right into our faces as we sat on the terrace watching the spectacle. The helicopter landed right in front of us. The mountain rescuers brought the woman in the helicopter. As it left it made even more wind. What a show! We really hope the woman will get well soon. We felt quite useless watching but there were enough people around who helped.

After the helicopter had left, we got ready to go down into the village. As we left the house, we saw a couple with two young boys at the side of the slope close to the house. The mother looked unwell so we went to see if we could help. She had hurt her knee and had trouble walking. We offered our help and walked with her and her skis down to the next street.

It must have been the fresh snow but also the fact that it was Friday, that there were so many accidents that day. Most tourists arrive and leave on Saturdays. That means on Fridays their muscles are tired from a full week of skiing and accidents happen more easily.

We walked through the village, stopped at a bakery for a carnival krapfen (doughnut without a whole) and continued our walk along the river Ache. During our time in Sankt Johann we walked along this river many times. Some days we watched it with high waters, running fast. Other days it was quieter and we could see birds diving in and out. The trees on the banks were covered with bite marks from beavers and we found two small lodges in the water.

As it was getting dark we headed back home to get the ducks back into their cage. Unlike most days, they looked like they were not ready to go to bed. Two of them were still taking a bath and the others were hanging around the trough with their food. It needed some shushing and waving from us until they started to walk into their house.

For dinner we made a big pot of chili and sat in the kitchen watching the last skiers coming down the hill in the dark, only visible because of their headlamps. We still had to prepare the laundry for the next day. On Saturdays, we cleaned the holiday apartments and brought in fresh bed sheets and towels. Then we were ready to watch a series and go to sleep.

Sankt Johann is a rather small skiing area. Compared to other ski stations in Tirol it lies quite low, which brings a higher chance of little snow in warm winters. However, we loved the hiking opportunities in the surrounding hills and mountains. Below you can find some of our favourite routes with gpx. Feel free to download the gpx and let us know how it went.

From Kitzbühel station to Oberndorf in Tirol station – 12km