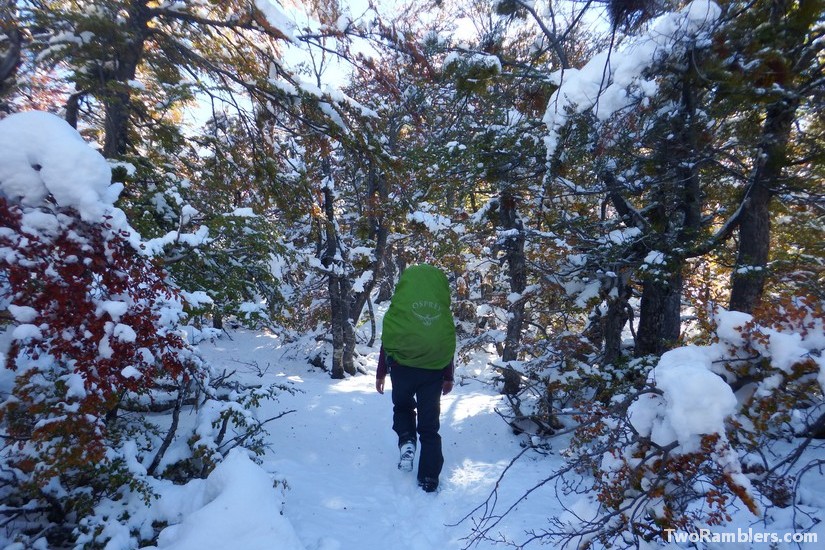 After two weeks of hitchhiking adventures we were ready for another hike. We had made quite some distance on our way north in the hope for warmer weather. As we reached El Bolson we were happy to find winter less close than in the south of Patagonia. The trees were still green and full of apples and pears. We felt ready for our hike around Cerro Hielo Azul.

A closer look at the mountains surrounding El Bolson should have warned us that up there it would be much colder than in the village. We ignored this and focussed on the sunny days predicted by the weather forecast. And so we headed off on what we intended to be a four to five day trek in the mountains west of El Bolson. We planned to stay in mountain refuges on the way but realised that these were more expensive than our hostel in town. Thus, we decided to stick to our tent.

After registering with the local alpine club we left on our hike. It had just stopped raining, the sun was coming through and promised a good day for walking. The way to the start of the hike led us along a sand road with big pine trees and wildly growing scrub of blackberries around us. It took us longer than we had expected to reach the beginning of the trek but with the sun out we enjoyed the walk a lot. Finally, we were not standing on a road sticking our thumb out.

The path led us through very green, thick forest. We reached our starting point to hike to the Refugio Hielo Azul at 2pm. We had to cross a long, wobbly, wooden suspension bridge over a fast river. On the other side, we found a sign warning us that we shouldn’t start hiking up to the refuge if it was later than 2pm. We sat down to have lunch. We needed some energy to climb up the 1000 m to the refuge but started to worry a bit. Only later we realised that the times indicated on the map we had received from the mountaineering club and the signs along the path indicate much longer times than actually needed.

We continued our hike, always going upwards. The waymarking was easy to follow, someone had nailed red and yellow painted bottoms of tin cans to the trees. It was still sunny but we knew that it would be colder up in the mountains. After about half an hour we saw the first small patches of snow. As we continued they got bigger and more until we finally had to make our first steps in the snow. Under our feet the snow made those typical cracking noises. What a beautiful sound to break the silence around us!

We noticed footprints in the snow. A person was taking our route in front of us. It was great to have an indication of the route to follow. The path had gotten very difficult. We needed to cross streams that formed from melting snow. At some places the water just ran across our path, at other points the path was flooded for several meters and we had to find another way. The footprints guided us.

Worried about our time we only took very short breaks. The last hour we walked through a 10 cm layer of snow. We were warm from walking uphill but could feel how the cold and wet slowly came through our shoes. We felt relieved when we finally reached the refuge. It was a cosy place, a hot fire was on. The refuge was run by a guy who lived there all year round. Beside the girl whose footprints we had followed through the snow there was nobody else. So we were able to warm up in the refuge and use the kitchen there. We were offered to sleep in the quincho, a shed beside the refuge where in the summer campers can prepare their meals. We could even make a fire. Relieved that we didn’t have to set up our tent in the snow, we cooked our dinner and then went to sleep.

The next morning, we got to see the full equipment of the refuge. Inside were benches and tables made out of wood in all sorts of shapes. Outside were solar panels, a water turbine and a small vegetable garden. Taking care of this refuge must be a good life.

Our route continued further into the mountains. Everything was covered in a thick, white layer but the autumn colours on the leaves still shone through. We walked through deep snow in the morning light towards the next refuge. The snow was untouched but for the paws of a cat. We followed these traces for about an hour until we reached the Refugio Natacion.

From there the trek went down hill. The mountain guide had warned us that this would be the most difficult part of the route as it was very steep. The snow melting under the sun into mud and puddles added extra difficulty. We had to hold on to branches and trunks around us to avoid just sliding down.

As we got further down we left the snow behind us. The route continued to be steep but was dry under our feet. We felt like mountain goats climbing down over rocks but probably looked less elegant. Our efforts were rewarded with great views over the valley full of high pine trees under us.

After the cold night, the hot sun provided an extreme contrast. We ate our lunch on a big rock sticking out over the valley, taking in the sun like lizards. From there it was still a long walk until the next refuge. We had to get down into the valley and follow the river Rio Azul upstream. The path was easy, following a 4×4 road through the forest but it kept going steep uphill for maybe 200 m just to make us go downhill the same distance again.

When we reached the refuge we were surprised to find a dozen tents in the field around it. It was a big group who had come out from El Bolson for a night. The refuge was less cosy and less equipped than where we had spent the night before and so we had to sleep in our tent. We still made a fire to warm up before we crept into our sleeping bags, wearing as many layers of clothes as we could fit.

The next morning a layer of ice covered our tent. We went into the refuge to warm up at the oven and had breakfast there. As we packed our tent our hands were hurting from the icy cold. We felt exhausted from the cold, the steep climbs and descends of the past two days and decided to cut our hike short and to go back to El Bolson.

We had to walk to Warton, where we would meet a road leading back to El Bolson. For a part we had to walk the same route back as we had come. Then we found a parallel route on the other bank of Rio Azul. We crossed a bridge, the river running through a canyon under us, so deep that we almost couldn’t see it. The river lives up to its name, it was incredible how blue it was.

We stopped for lunch at a beach. It looked like the perfect spot to stop for a swim: clear, blue water, cliffs to jump from and a sandy beach to relax afterwards. It had gotten quite warm, we were sitting in our t-shirts. Still, it was the end of autumn, not the right time to go swimming.

At 5pm we reached Warton. It had been a beautiful but long walk through the forest. Unlike the previous two days we met quite some people on their way in or out of the woods. Together with a couple from Buenos Aires we took a taxi back to El Bolson.

Overall, our hike around Cerro Hielo Azul was magical with the contrast between the snow and the warm sun, plus the blue river. We kept thinking that it must be great in summer too. Then it should be easier to reach up to the Refugio Los Laguitos further in the mountains. But from what we heard it must also be very busy then, thus a completely different experience.