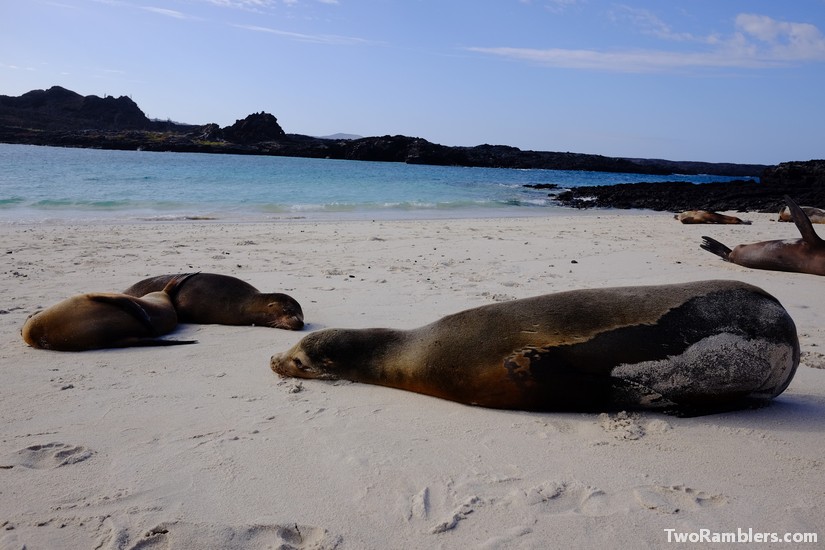 The Galapagos Islands were the perfect finale to our trip to South America. After five months sleeping in hostels and our tent, carrying our backpacks and hiking through cold and heat we opted for the luxury of a cruise. We spent eight days on a small yacht, the Galaxy, together with 14 other tourists from all over the world. Our guide Rafael showed us around on the different islands and introduced us the surreal variety of nature.

The eight days were packed with excursions on land, through bays in the small dinghy boats and snorkelling along the coast of the islands. A full summary of all the things we’ve experienced would be too long for one post. Thus, this article covers only one day as one of the highlights between so many highlights. We are not sure if words can live up to the beautiful experience we have had but we will give it a try.

It was a warm, sunny morning. Actually, all the days we spent on the islands were sunny. Being at the Equator there are only small seasonal differences. June lies at the end of the wet season. Now and then there can be some rain but the sea is warmer than during the dry season.

Still filled from the delicious breakfast buffet we put on our life vests and got into the two dinghies. They drove us away from the yacht into the shallower waters of Bahia Elizabeth. The bay was surrounded by mangroves growing over black lava rocks. Below us was clear, blue water and a sandy ground.

First, we spotted sea turtles gliding through the water with just a few strides of their flippers. They came very close to the boat, dived under it and didn’t seem to be interested in us at all. Then, something bigger came towards our boat. It was black and was gliding through the water. At a closer look, we realised it was a group of rays. It looked like they were flying through the water, steering with their big wings. Very elegant! They were swimming in groups of 10 or 20, some plain black, others with white dots. There were brown and golden ones too. It was spectacular to watch.

Further into the bay, we saw small penguins speeding through the water. Our guide explained that these funny birds originally must have come from the Antarctic, probably floating on wood along the coast of South America.

We discovered a sea lion, sitting on a branch between the mangroves. The dinghy drove closer and the sea lion slowly lifted its head. It was as if she was posing for our pictures, then got bored and went back to her nap. As we continued, other sea lions swam close to the boat, interested in what we were doing.

It was fantastic to see how close these animals were living to one another and how little they cared about the human presence around them. We spotted a little bird sitting between the mangroves and watched as it caught small, silver fish out of the water. One after the other, whenever the bird stuck its head under water, it was sure to come out with yet another wiggling fish.

The dinghy brought us to a small island in the bay. It was a bunch of rocky cliffs sticking out of the sea. It was full of birds. As the boat navigated around the island, there were the famous blue footed boobies, sitting in row for us to admire them. There were pelicans carefully watching the water below them, ready to jump into the sea to catch a fish. We saw penguins and cormorants. So much wildlife on these bare rocks.

And of course, there were the ever present iguanas. Here, we could watch sea iguanas. They had a greyish colour, similar to the rocks they were sitting on. During the trip, we got to see iguanas of all sizes, some on their own, others in seemingly uncountable numbers lying on top of each other as they were heating up under the sun.

We got back to the yacht and as the Galaxy continued heading north, we got a small lecture from Rafael, our guide, on the wildlife. He showed us some short documentaries about the different islands, explaining their uniqueness.

Lunch was again delicious. After some soup, a buffet was waiting for us with meat, fish, different vegetables and salad.

On the afternoon program was first a walk on Isabela Island and then some snorkelling. It was very hot as we made our first steps on Isabela. Rafael had told us that with a little luck we would see giant tortoises. And as it was during the entire trip, whenever Rafael said there would be a chance of something happening, it did happen.

We had barely made ten steps on the island when we spotted a giant tortoise taking a very slow walk on the sandy path between the mangroves. It was very big and very disinterested in us and continued its walk along the path. As we carefully passed it we saw some other tortoises hanging out around a muddy puddle.

Next, we came across a big, yellow iguana. It had been hiding in a hole but as we came closer it suddenly crawled out. Then it slowed down and chose a spot to sit in the sun. During the rest of the walk we saw some birds, including the different finches which were studied by so many to understand evolution. And we saw a lot of tortoise poop in all sizes and textures.

After the walk under the burning sun, snorkelling presented a great opportunity to cool down. We had left our snorkelling gear on the beach where the dinghy had dropped us off and happily dived into the refreshing water. We could already hear the others shouting ‘turtle’ and ‘shark’ as we got in.

And indeed, there was a bunch of sea turtles grazing on the algae. A few of them swam around us and got very close. There was a myriad of different fish in all colours, some swimming on their own, others in big groups. On the bottom we could see sea cucumbers and star fish.

This entire underwater world was just surreal. It is unbelievable that you only have to put on some goggles and stick your head in the water to see this fantastic world which from the outside just looks like a bit of blue sea.

And yes, there were sharks too. They were very small and stayed away from us that day. But on another occasion we were snorkelling around some reefs and there the sharks were probably 1.5 to 2 m. Still not big enough to really scare you but enough for a little thrill.

The way back to the yacht was very bumpy. After a calm day the waves had gotten stronger and back on board for a hot shower we held on tightly to the handle bar to avoid any accidents.

After dinner we spent some time on the sun deck of the boat. We watched the waves and then realised that something big was passing the boat. First, we hoped for whales but then saw it were gigantic rays, Manta rays more than 2 m wide that passed the boat. The tips of their wings stuck out between the waves as they did their slow, elegant strokes.

We watched the sun go down on the horizon. We were getting closer to Fernandina Island on which a volcano had erupted a few days earlier. As it was getting dark we could see the red reflections of the lava against the sky.

It was the perfect ending to a perfect day on this incredible trip. Being on the Galapagos Islands was like being in an attraction park. At some point we were convinced that all the things happening around us couldn’t be real. Whenever Rafael told us that there was a chance we could see another species or some special event it would happen five minutes later. We got to snorkel with seals, penguins and sharks, we watched a fight between two iguanas over their territory and we saw a snake strangulating a lizard.

We got so close to all these animals that weren’t afraid of us at all. Being in a national park, they must have understood that people came to watch but wouldn’t harm them. It was an unforgettable experience.

Tours: Kevin spent a lot (really a lot) of time deciding on the right boat and itinerary for us. And it was definitely worth taking a closer look at the routes and different types of boats. A trip to the Galapagos is unbelievably expensive, so you want to make sure your money is well spent. In the end, we booked the Galaxy Cruise through Happy Gringo as they offered the best deal from all the companies we had been in touch with.

2 thoughts on “On the Galapagos Islands”