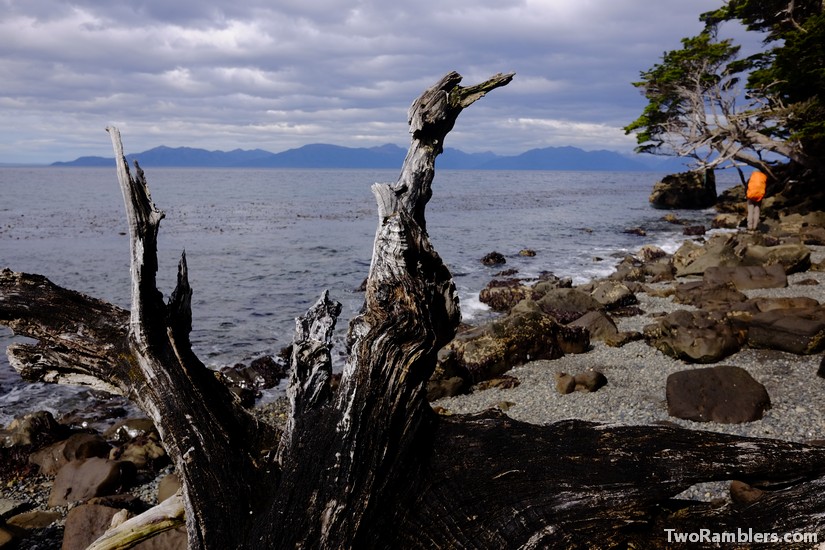 We sort of stumbled over the hike to Cabo Froward while we were in Punta Arenas. Originally, we had planned to spend two days in Punta Arenas and then take the ferry to Isla Navarino. However, the boat was fully booked because the summer holidays for the Chileans were ending and the islanders were heading back home. With a week to spend we looked for something to do. The hike to the most southern point of the American mainland – the Cape/Cabo Froward – intrigued us.

We left with little information. We thought this to be an easy hike following the coast line, the perfect opportunity for our hiking boots to get used to the continent. In the end, it was more challenging than expected and we did not reach the cape. But our efforts were rewarded with moments of happy solitude far away from any villages or roads and great views over the Strait of Magellan. We even got to see dolphins.

From Punta Arenas we took a bus in the morning to the small village San Juan. From there, the road goes on for some 10km, then there is only a path. Dropped off by the bus at 9am we had a late breakfast at the beach and then started our walk. It was a real pleasure to finally be walking again, especially in this beautiful scenery: snow topped mountains at the other side of the channel and a beach full of different sea birds.

Before lunchtime we had reached the lighthouse Faro San Isidro. A family was picking berries from a bush. They explained to us that these were Calafate berries. These delicious little fruits resemble blue berries but have a few more pits. We have found them all over Patagonia since. More than once Franziska fell behind during our hikes and from her blue lips Kevin could immediately tell what had happened.

From the lighthouse the track became more varied. Partly it ran along the shore and then went slightly inland through thick forests. During the first day the track was easy to follow. The route was marked with orange ribbons and small piles of stones.

We set up camp after crossing Rio Yumbel. It had been easy to cross this first river, shoes off and pants rolled up. From a German couple on the same route we got the first indications that the route was not going to be as easy as we had thought. They gave us a more detailed timing of the hike and a timetable of the tides. According to their information the path would become increasingly difficult and less maintained towards the cape and the rivers would get more difficult to cross depending on the tides. Five days were suggested for the hike, while we had only planned for four.

We postponed worrying and instead put up our tent at the beach in a beautiful bay, looking out over snow capped mountains and made a fire from the drift wood to keep us warm.

We set off with our spirits high, still hoping that we could hike the 24 km until Cabo Froward within the day. The weather was good and the walk easy, leading along the bay. But more difficult parts were to come. Whenever the path left the beach we had to climb over steep, slippery cliffs or through thick forests, our way obstructed by fallen trees.

After our hike we found a little booklet describing the route of Charles Darwin and the Beagle through the region. According to the booklet Darwin must have gotten on land not too far from where we walked. In his diary he described a landscape that resembled a lot what we had walked through: “Thick forests that begin where the high tide stops, forests full of fallen trees that make it impossible to continue the chosen route and rotten trunks that were dangerous to step on as they could collapse under a human step.” (Charles Darwin. Travesía al fin del mundo – Ruta Patrimonial Nº52 by Ministry of National Resources)

After a while, the path led us deeper inland, climbing to a plateau. Walking became more difficult, the ground more muddy until we found ourselves in a sort of moor. A layer of moss covered the ground. Stepping on it was like walking on a pillow but we had to be careful because the ground was very wet. With every step you risked to sink ankle deep into the mud. This landscape was unlike anything we had ever seen: the moss had colours from light green to orange-brown. At a closer look there were loads of tiny flowers all around us. But it was exhausting to walk there, having to carefully watch every step and making detours from the path to avoid the muddiest pieces.

We walked for an hour through the swamp and then reached the shore again. A second river was awaiting to be crossed. Rio San Nicolas was still easy to cross, the tide seemed to be low. Another look at the schedule that the German couple had given us put us in some doubt: it had indicated that we were at a point of high tide. We crossed the river, following a sand bank into the sea. The water came knee high.

After lunch we continued our route. A Chilean couple coming back from the cape warned us about the route ahead. We would meet a short cut through the forest but if possible with the tides it would be better to stay along the coast. The way inland would be steep, full of fallen tress and rather muddy.

When we arrived at the junction we had no choice but to take the difficult way inland. By then the tide had become higher and we could not risk getting stuck on the slippery, wet cliffs along the coast. The way through the forest was more an obstacle course than a path. Already exhausted from the long day we had to climb over and duck under countless trees lying in our way. At some points we had to get down on hands and knees, taking off our backpack to fit under a particularly big trunk that we could not climb over either. Slowly we advanced and finally got back to the shore. By then it had started to rain quite hard.

Despite the difficulties we decided to continue until we would have crossed the third river, Rio Nodales. At that point we were sure we would not reach Cabo Froward any more but there were still some hopes to reach it the following day.

When we got to the third river it had stopped raining, the sun was slowly beginning to set. The river looked totally different from the other rivers we had crossed before. The mouth was much wider, the river looked deeper. Based on the tide schedule in our hands we thought it was not high tide and prepared to cross the river.

We packed our shoes and pants in our backpacks and went into the cold water. Kevin found a sandbank that seemed to take a curve through the mouth. After almost 50 meters walking into the open sea Kevin started to cross the river. It should have been the shallowest part, ideal for crossing. But as Kevin advanced the water got higher and higher. It first went to his hips, then slowly up to his chest so he had to carry his backpack over his head. Determined he kept going. At the deepest point his chin was under water but then to his relieve he got to shallower parts and slowly reached the other bank.

Franziska had tried to advance too but quickly realised that she would not be able to cross. She stood in the cold water, searching for a better route, shivering from the cold water and the blowing wind. The only comfort were some dolphins swimming about 100 meters from us, jumping around and probably having a good laugh at the two idiots in the water.

Kevin came back to carry Franziska’s backpack over the river. She just swam. To our luck there was another couple camping on the other side of the river with a warm fire. With their help we finally understood that the tide schedule we had looked at was completely wrong. We had just crossed the river at the highest tide! Had we known this, we would not even have attempted to reach the other side. We had read that crossing the rivers at high tide was impossible.

Exhausted from the cold water and the difficult trek we reconsidered our plans. We decided not to walk all the way to Cabo Froward but rather take it easy and start our return the next day. We felt defeated. The cape was only 5 km away but with most of the route going along the cliffs it would have taken almost five hours to reach it. With only enough food for two more days we had to turn back.

This was a good lesson. Since then we always carry some extra rations of food with us.

With the correct tide schedule at hand we started our way back. By then we knew our route, so we could plan better. This time we crossed Rio Nodales at lower tide. The water came no higher than to our waist.

We could take the shortcut along the beach. It included climbing over some slippery rocks but we were glad we could avoid the difficult path through the woods. By the time we reached Rio San Nikolas the tide was low and we could easily cross the knee-high water.

The walk through the swamp still felt endless and we were happy to reach the beach again where we had camped the first night. We met the German couple again who also had noted that the tide schedule they had given to us was completely off.

Although we had done the same route the day before we still enjoyed it. The variety of landscapes from thick forest, to swamp, to cliffs and sandy beaches in such as small area was unique. And then of course there were the ever present snow covered hills across the sea and once in a while some dolphins saying hi.

We started the day early, expecting a long walk but as we knew the route we made good time. In the early afternoon we reached the road again, the end point of the hike. We decided to try hitchhiking back to Punta Arenas as there were 10 km left to the bus stop. We had to wait our turn, there was a group of French guys also looking for a ride, so we sat at the beach for a moment.

In the end, we got a lift from a Chilean man in his fifties and his mother. They were out on a little trip, taking a short stroll along the beach. We got into the tiny car and joined them on the way back to Punta Arenas. We made several stops for more wandering around. They told us a lot about the places we passed, seemingly knowing the area very well. We struggled to understand their quick Spanish but they kept going. In the early evening we were back in Punta Arenas.

Make sure to study the tides of Punta Arenas when planning your trip. The rivers can only be crossed at low tide. You can find the information online, for example on tide-forecast.com.