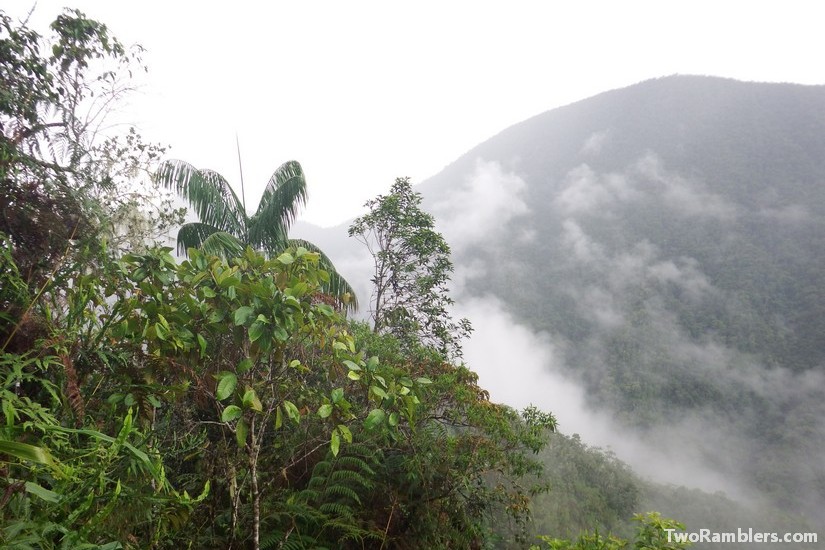 Ecuador was the last destination of our big trip to South America. From Peru we took a bus going north, crossed the border and stopped in Loja, the first bigger city on the way. From there, we wanted to get into the Podocarpus National Park. The park lies at an interesting geographic point and is influenced by the climate and vegetation of the Andes, the Amazon and the Pacific. It is named after the podocarpus tree, a conifer of which particularly big ones grow in the park and is home to the spectacled bear. We wouldn’t miss the opportunity to spot a bear.

Another reason to see the park was that Kevin and some of his friends had made a donation the World Land Trust in memory of a friend who passed away. The money had been given to the organisation preserving the Podocarpus National Park, Naturaleza y Cultura.

Kevin had contacted this organisation and one of their employees was very keen to show us around. Pedro came twice to pick us up in Loja in the morning and brought us to two different access points into the park. It was great to have a guide with us to tell us about the efforts of the organisation and the natural variety of the Podocarpus National Park

Day 1 – rain in the rainforest

On our first day into the national park, Pedro brought us to the northern entry point near Zamora. It was a rainy morning as we drove out of Loja, into the cloudy mountains. Pedro told us about the work of Naturaleza y Cultura to protect the park. The organisation was mainly buying up land from or offering an exchange of land to local farmers around the park to create a buffer zone towards which the park can expand.

On our way to Zamora, Pedro stopped at a spot where we could see the difference between the land that belonged to the park and the surrounding fields. The parts of the national park that hadn’t been touched by agriculture were so green. There were trees overgrown by other plants. It looked impossible to walk in that forest. We saw other areas that had been bought over recently. Some trees had been planted but Pedro explained to us that it would take another fifty or sixty years before these parts would start to resemble the rest of the forest. And then there were those parts that were outside the national park. Green fields on slopes with a power lines running over them.

Pedro also explained to us that the main danger to the park no longer came from agriculture but was gold and copper mining taking place in the area. Then we passed a research station where scientists from all over the world were studying the forest wildlife. Apparently, they continuously discover new species in the park.

Pedro dropped us off at the entrance to the national park. From there is was a ten minutes walk to the park ranger office. Already, we were surrounded by green wildlife. The air made us think of tropic houses in the botanic gardens of Europe. It was warm, sticky and humid. There were many plants around us that we had never seen before. Others we had seen before but in a much smaller version as an indoor plant.

The sand road we were walking on took a turn. Suddenly there were thousands of parrots in the air. A few steps further a sign explained to us that these birds were nesting in the steep sandy walls to our right.

Pedro had warned us that is was rainy season. There was a slight drizzle in the air and the clouds around us looked like there was more to come.

At the ranger station we received some information about the walking routes through the park. There were two waterfalls to visit, a river, a viewpoint higher in the park and an eight hours round walk through the jungle.

We decided to check out the waterfalls first. On a warm day we could have gone swimming there but we felt already wet enough from the rain. We continued up to the viewpoint. The ranger had warned us that it would be a steep walk and indeed, it was. Quickly, we got warm from all the climbing and took off our rain gear. Our clothes were soaked but it was refreshing in the warm air.

We were on a very small path, trees and bushes all around us. It was easy to imagine this place full of animals, birds and insects. But they were all hiding from the rain. We had to make do with the flowers and strangely formed leaves.

The more it was raining the more slippery got the ground. We started to doubt if there would be anything to see at the top of the hill we were walking up with all the clouds around us. And indeed as we reached the top we couldn’t see very far. Clouds blocked our view.

The way back down was even more slippery and muddy. We had to watch our steps, holding on to roots, branches and each other not to slide down the steep hill.

Back at the ranger station we decided to continue our walk. We were soaked but couldn’t get any wetter. Down there, the vegetation was different. There were other types of plants around us and we even got to see a salamander and a butterfly. After a quick glance at the river we asked the park rangers to call a taxi for us. It brought us to Zamora from where we took a bus back to Loja. The hot shower in our hostel was the perfect finale to this wet day.

Day 2 – more rain in the rainforest

The next day, Pedro picked us up again. He brought us to another entrance of the park, south of Loja on the road to Vilcabamba. There, the ranger station was at the road from where it was an 8 km drive uphill to start our walk.

Pedro dropped us off. Again it was a rainy day. We were higher in the mountains, so it was colder than the day before and we stayed in our full rain gear. The walk was a round of 10km with a few viewpoints on the way. First, we thought to do that but there wouldn’t be much to see with all the low hanging clouds. Instead, we chose two shorter round paths.

Again, it was very green around us but the animals were hiding from the rain and the clouds restricted the view. As there is no rain gear that can resist this amount of rain, we were soaking wet. So, we decided to go back to Loja. We had to go back downhill towards the ranger station where there was a bus. Kevin was cold but we still decided to walk the 8 km. A taxi out there would have been way too expensive.

We walked at a good speed down the sandy road. We no longer were among the trees so got a bit of a view over green hills and the clouds. After less then an hour we had come half way and to our surprise the sun came through. Slowly it dried our wet hair and clothes. It pushed away the clouds and we got a better view over the hills around us.

Still a bit cold but in a better mood we continued and reached the bus back to Loja. Again, we ended the day with a hot shower.

The Podocarpus National Park is a beautiful piece of the Earth. We enjoyed the spectacular vegetation. But on a sunny day it is probably a lot more enjoyable.

Seasons: It’s best to visit the Podocarpus National Park outside the rainy season which lasts from March to July.

Surroundings:  We very much enjoyed being in Loja, a very pleasant place to hang out. Franziska discovered a podcast about Loja with some great tips for the city: http://extrapackofpeanuts.com/destination-diary-loja-ecuador/

Big thanks to Pedro Paladines from Naturaleza y Cultura! We supported the organization via World Land Trust.