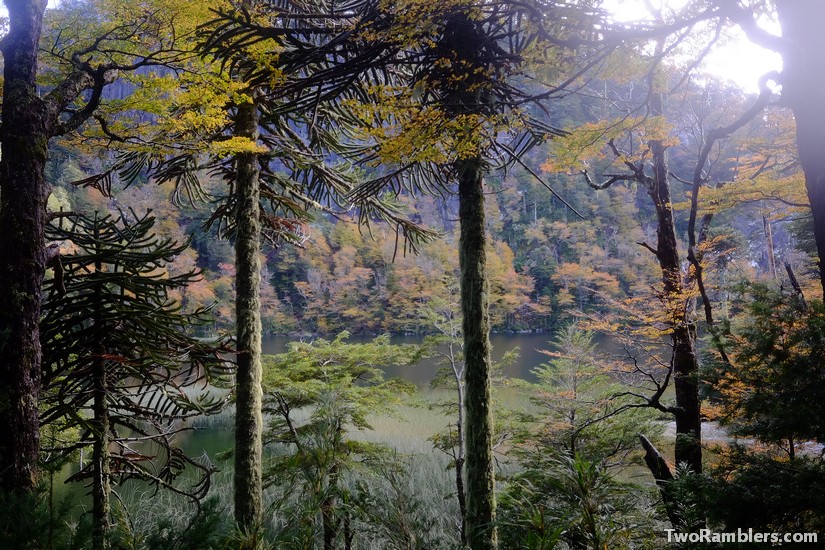 After some sunny days in Puerto Varas we had high hopes to do a last multi-day hike in Patagonia. We picked the Parque National Huerquehue (pronounced something like ‘werkeway’) famous for its huge, primeval looking trees. But first, another adventurous day of hitchhiking lay ahead of us.

A lot of luck and a strange encounter

It would have been easy to take the bus from Puerto Varas to Pucon but we wanted to save some money, knowing that we would have to spend quite a bit to get to Peru afterwards. So, we got our backpacks and walked towards the motorway going north from Puerto Varas. Hitchhiking on the busy roads in the Lake District was a new experience for us. We were used to the quiet roads of southern Patagonia with one car every ten minutes. Suddenly, we had to watch out not to be run over.

We hadn’t even gotten the chance to stick out our thumbs when a guy stopped and offered to take us to the next motorway access. We gladly agreed but when he dropped us off we realised we had made a bad decision. There was no way we could just stand on the motorway hoping for someone to stop for us and being on the busy motorway access wasn’t a great idea either.

Wondering what to do we looked around us and realised that this motorway was very different from what we know from Europe. Here, buses stop regularly just anywhere on the road to pick up passengers and drivers seemed to be used to people standing beside the road.

And so we did the only logical thing, we stuck out our thumbs. Soon a car stopped and a guy in his fifties offered to bring us a bit further north. He got very interested when he heard that Franziska was German. He was from one of the many families of German origin in the Lake District who settled here in the 1850ies. Soon he started to sing those parts of the German national anthem that are not sung since the end of the Third Reich and started to complain about the laziness of everybody who is not of German origin. We were not sure how much he was just making fun to make us feel uncomfortable and what was serious. But we were very happy when we got out of his car after a 15 minute ride.

After lunch beside the highway we continued hitchhiking and a truck driver stopped for us. This was the first time for us hitchhiking with a truck. There were almost 20 tons of cement behind us. Kevin got in on the passenger seat and Franziska had to sit on the bed in the back of the cabin. Vladimir, the driver, told us all about his three kids, the best places to see nature in Chile and the low wages compared to the costs of living.

He dropped us off at the route towards Villarrica. And again, before we could even decide on where the best spot for getting the next ride would be another car stopped. The driver offered to take us almost all the way to Villarrica. He drove incredibly fast, probably around 120 km/h on a road where 40 km/h was the limit. Once again, we were happy when it was time to get out of the car. Another short ride with another guy and we reached Villarrica where we spent a night in a room rented out by a woman living with her young daughter. Kevin got to play with the barbies and Franziska discussed education systems.

The next day we took a bus to Pucon and started preparing for our trek. We bought food for three to four days and went to the tourist office to get some more information about hiking in the Huerquehue National Park.

One day later we were standing at the entrance to the national park, backpacks ready for our trip. But oh! The tourist office in Pucon had forgotten to tell us some important information. The biggest part of the park was closed down due to recent snow fall. The only place to camp was right beside the ranger office at the entrance of the park and they expected even more snowfall during the night. Disappointed we left our heavy bags with the rangers and decided to make a day hike out of our trip.

Still, we had a fantastic day. We chose the bigger version of a walk around three lakes. The trail began with a climb uphill. It had been very bad weather the past night, so the path was very muddy and difficult to walk on. On the way to the lakes we made two small detours and found some pretty waterfalls.

Finally, after about two hours we reached the first lake, Lago Chico. It was a beautiful, serene spot in the forest, looking out on this lake in the sun. There were a few other tourists around and so we decided to continue our walk deeper into the national park.

The trail became smaller as we walked further up and suddenly we were standing in snow. Around us were the big Araucaria trees that the Huerquehue National Park is famous for. It was amazing to walk among these giants with their peculiar ‘needles’. It seemed like at any time a dinosaur could come out from behind one of these tress.

The deeper we went into the park, the more difficult it became to follow the path. A big part of the walk was flooded from the rain of the previous days and some melting snow. We managed to find a way around the puddles and headed back down hill. Suddenly, we were in a hurry as we wanted to catch the last bus back to Pucon. After a good sprint we got back to the rangers station and then to Pucon.

The last day in Patagonia

We decided to spent our last day in Patagonia at one of the thermal springs that the northern Lake District is rich of. From Pucon it took as less than an hour on the bus to reach Los Pozones, one of the less commercialised hot springs. When we got there, there was only one other couple and we could chose from about eight pools of different temperatures. We tested them all but soon noticed that some of the pools were just too hot to even enter. Only one of them had the perfect temperature. The air was pretty chilly that day but the hot pools kept us warm.

We managed to get a ride back from a couple in their sixties who had come to Pucon to visit their daughter. They were going to cheer for her the next day at a national rafting competition.

These last days in Patagonia were wonderful and made us doubt if we had spent enough time in the region. We still wanted to do and see so much. Two and a half months just hadn’t been enough. But winter kept pushing us north and so we decided to make the big trip to Peru. There we would be able to hike again without a risk of getting snowed in.

Transport: Hitchhiking is very easy in the Lake District. There is a lot of traffic and locals are curious and very friendly.

Accommodation: There are many hostels and guesthouses in Pucon. In low season there is a lot of room to bargain.

Hiking: The Huerquehue National Park is a great place for day trips and multi-day hikes (when it is not snowing). There is a camp site at the entrance of the park and one further inside the park. If you are doing a longer hike you can reach the natural hot springs Termas de Rio Blanco.